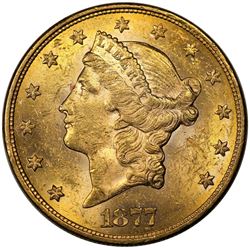 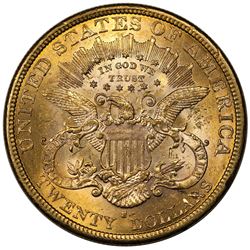 In 1877 Texas train robbers, Sam Bass and his gang, robbed a train in Big Springs, Nebraska. They couldn’t get the mail car safe open, but on the floor of the car were three heavy wood boxes being shipped east from San Francisco. Each box contained 1,000 twenty dollar gold pieces. Sam and his gang broke open the boxes and high tailed it back to Denton, TX carrying bags of Double Eagles. It is rumored they buried some of the loot in a riverbank near Denton. Big spender Sam was soon caught and killed in a shootout near Round Rock, TX where his grave became a tourist spot. We can’t guarantee the 1877-S San Francisco twenty dollar gold piece offered here is one of Sam’s; but then no one can swear that it is not!

BID ON THIS LOT